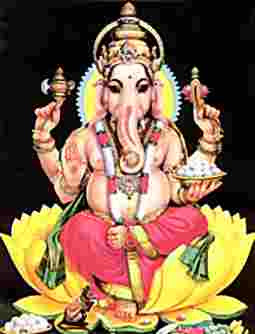 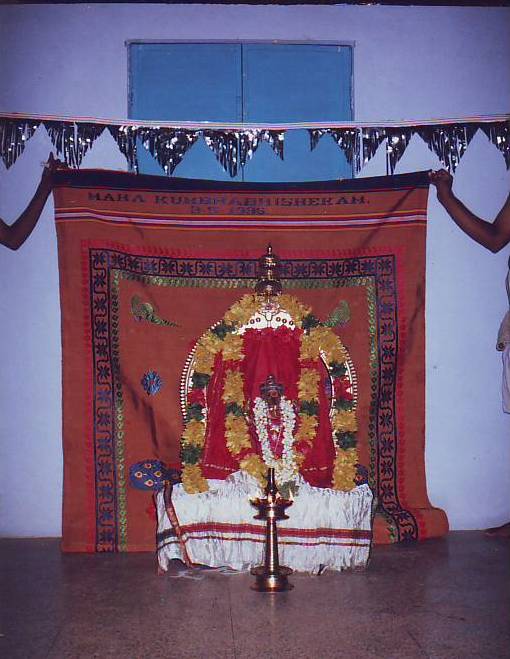 A copy of the 2012 Mahakumbhabhisheka Notice will be shortly made available in the website for the exclusive use of Devotees. Please regularly check the site.

Following the footsteps of the Famous Festival of Vaikkathashtami being Celebrated in a grand scale at Vaikkom Mahadeva Temple on the Ashtami day of malayalam month; Vruchikam, this festival has started to roll in our village too in the last couple of years. In the recent years the villagers are conducting 'Annadhana' apart from the normal Utsava Moorthy Procession in the morning. Today (19.11.11) to mark the Vaikkathashtami day there was a procession of Lord Meenakshy Sundareswarar utsava moorthy in the Goratham in the agraharam streets. Some moments of the function were uploaded in the PHOTOS section as a separate Album '2011 - Vaikkathashtami Pics' for devotees.

We are making a loyal attempt to write few lines about the origin of this festival. The grandma told story of Annabhisheka is that 'One day at kailash mountains Lord Siva asked Goddess Parvathy to cook food for him. As Goddess Parvathy has a difference of opinion with Lord Siva on some other issue, she turned a deaf ear to Lord Siva's instruction and eventually walked out of the premises. Looking at this, Lord Siva ordered his second wife; Goddess Ganga to cook food and serve him. Whilst, Goddess Ganga cooked the food, Goddess Parvathy returned back with guilty conscious in mind but when she saw Ganga Devi has taken care of her responsibilities, she in anger took the baked rice and pour at Lord Siva's head. This day is being celebrated as Annabhisheka by all the devotees and to mark this day the festival is being done at every Siva temple'.

The highlight of the function was that of the chariot procession of the utsava moorthy of Meenakshy Sundareswarar in the agragaha veethi (village road). Some of the nice moments of the function were caputred digitally and uploaded as '2011 Annabhisheka Pics' under the PHOTOS heading for those who could not make it in person. Please enjoy and be the receipient of the divine blessings of Lord Meenakshy Sundareswarar.

It is our immense pleasure to inform all our beloved devotees that the "Mahakumbabhishekam 2012" date has been fixed with the blessings of Chaithanya Mahaganapathy & Meenakshy Sundareshwar".

The detailed programme notice is under finalization and will soon be despatched to all the devotees and a copy of the same, if possible will be uploaded in the site.

With traditional zest & fervor this year's Navarathri Festival was concluded in a befitting manner. Everyday starting from 28-Sept till 6-Oct there were Abhishekams at both the temples in the morning & evening followed with chandana kappu (siva temple) & vilakku at both the temples along with Nadaswaram. The highlight of Navami vilakku (9th day vilakku) is of fire works whereas the final vilakku; Dasami was of chariot procession of Mahaganapathy to Siva Temple & Meenakshy Sundareswarar's procession to Mattumantha to witness Ambum Villum and to bless the villagers.

We have great pleasure in informing all the village & outside residents of our village that, with the Blessings of Lord Chaithanya Mahaganapathy & Meenakshy Sundareswarar, the ‘Parihara Poojas & Homams’ that were proposed by Sri. Ramaswamy (Astrologer – Thamboola Prashna) on 3rd July, 2011 for successful completion of MAHAKUMBABHISHEKAM - 2012, was successfully completed with the abundant Grace & Blessings of our Village Deities. The following were the Poojas & Homams conducted on 16th, 17th & 18th of Sept’11, followed by a ‘Samaradhana for 12 Vaideegars’ on the last day of the function.

Now, that we have concluded with the parihara poojas & homams, we are now focusing our attention on printing programme notice, donation receipts, temple renovation works etc. We also have plans to open a website exclusively for the ‘Mahakumbabhishekam 2012’ function and the website address will be made available in the programme notice to follow.

It was nearly 16 years back (3rd May'96) a Jeernodharana Mahakumbabhishekam was performed in both the Agraharam Temples. Though, the life span to perform a Kumbabhishekam shouldn't cross 12 years as per vedic scholars, we are already late by 4 years!

Hence, it was decided among the agraharam residents to perform a Jeernodharana Maha Kumbabhishekam in both the agraharam temples in April/May 2012 and to find out the Probable Date, Karmas & Pariharams, an "Ashtamangala Tamboola Prashna" was conducted on 3rd July'2011 at Chithanya Mahagapathy Temple. All the Yogas & Stars are favouring us and with a renovation of the current temples and performing some parihara karmas, the Kumbabhishekam can be done in a fitting manner.

The Kumbabhishekam date is yet to be finalized and the same will be updated in the site as soon as the info is available. A preliminary meeting is called for on 17.7.2011 (Sunday) to decide further course of actions.

This note of appreciation is for extending the Mahakumbabhishekam 2012 Committee's sincere thanks and gratitude to all those who participated in person to make this mega event a grand success. For those, who couldn't make it in person, we are thankful to them too for their guidance and moral support extended.

Though, we intially thought of adding some pictures of the concluding day of Mahakumbabhishekam function, as the space is very limited in this free website, w...

Today (10.3.12), we have uploaded our 2nd Kumbhabhisheka Programme Notice in the HOME page of our website for the use of devotees. Please be informed the scanned copy of the notice may not be as appealing as you expect, however to overcome this, we will forward by post a hard copy of the notice in the coming days to each individual devotee.

Since I am leaving for Sabarimala and on return will be stayed in CHENNAI till 2012 Septr. I am coming to Our village from Chennai on 29th April. Since I will not be available to HYDERABAD. till Septr. Please send all my correspondecne etc. if any to the following address,which I have given to you.

The recent mass destruction due to Tsunami and subsequent nuclear blast in Japan has put in a question of our saf...

All The Blessed Devotees,

We have uploaded the Mahakumbhabhisheka Function 2012 Notice in the HOME PAGE  of our website today as the first paragraph. The notice has been uploaded on a medium resolution size to make the upload process complete. No worries if the quality is not upto your expectation, as the original hard copy of the notice will reach each individual devotee in a co...

The "2012 Mahakumbhabhisheka Notice" launch function was held on 30th Nov'11 at Sri Chaithanya Mahaganapathy Temple. Some of the moments were pictured and uploaded in the PHOTOS section as a separate album in the name "2012 Mahakumbhabhisheka Notice Launch Function" for the use of devotees. Shortly copy of the programme notice will be uploaded in the site for the use of devotees.

MY VERY OWN KAKU - CHAPTER-2

MY VERY OWN KAKU

MY VERY OWN KAKU

Start a Free Blog at Webs.com